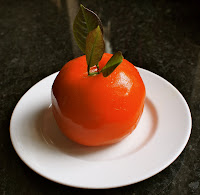 I recently had dinner at Dinner, by Heston Blumenthal. For various reasons the Hubby and I weren't actually going to order "Meat Fruit", but the kitchen sent us one, and we were completely blown away by the texture of the parfait, and the contrasting acidity of the jelly.  The dish is light, but rich, moreish, very slightly palate cleansing - and yes - I accept that those are complete contradictions.  It's the mandarin jelly - it really does release something in the palate that allows the very rich parfait to not become overly cloying.

When I wrote my restaurant review I searched for the recipe, intrigued about how it was made - everyone knows I'm a complete sucker for a culinary challenge :0)

Not only did I found the actual recipe given to the Guardian by Heston, but I also found a tiny bit of video clip which showed it being dipped, a video blog by a Thermomix blogger, and a variation by the Cumbrian Foodie on his blog.  I suggest you look at them all. If you're serious about making this at home, it's worth making the parfait a week or so before you need it, and perhaps doubling the quantify to allow you time to play with the jelly dipping.  All of the procedures up to the jelly are incredibly easy - do give it a go - it's much easier than it might seem.

For the chicken liver parfait:
100g shallots, finely sliced
3g minced garlic
15g sprigs of thyme, tied with string
150g dry Madeira
150g ruby port
75g white port
50g brandy
18g table salt
400g chicken livers (trimmed weight)
240g eggs
300g unsalted butter, melted
For the mandarin jelly:
45g leaf gelatine
500g mandarin purée (I used half a pack of Boiron's mandarin purée)
80g glucose
0.4g mandarin oil
1.5g paprika extract (the paprika is to colour the gel - instead I used a specialist cake decorating gel, in egg yolk yellow)
To make the fruits:
Not this is the point where I show you a perfect meat fruit, the one I prepared earlier... But I don't want to do that just yet :0) Instead here are the things I've learnt, which you might like to consider, with photo's to illustrate the points.  After all what's the point of blogging if we don't share our experiences?

So, example 1.  If the parfait ball is too smooth to start off with, the resulting mandarin looks somehow quite fake. I took to roughing up the parfait slightly in the cling-film with my hands before dipping it. Also in this example, the jelly was definitely too warm - I thought it was room temperature, it wasn't. At this point I decided to take one parfait and dip it every ten minutes. As a result this parfait sat on the side for over half an hour, and you can see that effectively defrosting it at room temperature causes the shape to slump.  There's still not quite enough colour in the gel to cover all the flaws (you can't see it as well here, because I re-dipped it), but I had to boost the colour to a practically fluorescent orange colour - you're not looking for natural - you really are looking for an unnatural intensity.  You can see all of the above in the photograph.


In this next example the jelly was far too cool, and it set around the parfait instantly in a slightly monstrous and lumpy version of the skin! Amusing though - we thought this one was great fun.  It may look as though you can get away with this, but bear in mind it will have a very thick jelly coating!

In the next example we whisked the jelly until it was smooth again and a fraction warmer, and then repeated... This was among the better examples.

I didn't make many, but I think you can see that it's the dipping that requires the work - everything else was easy. I have seen other examples where people just went with the smooth jelly, and if this is your preference, stick to it all the way through to ensure consistency.

The one good thing is that you can keep the parfait balls in the freezer until your ready - I think in future I'll make everything up to that point at least a week in advance (and make more than I need), and then just keep them in the freezer until they're required. Pate can be stored for up to a month in the freezer, so you could keep a batch on the go, as long as you date them appropriately.

Does it taste like the real thing? Well, it's chicken liver and doesn't have the fois gras included in the restaurant version, but I think it's a pretty accurate recipe.


As a quick aside, I do have a water bath, sous vide equipment and thermomix, so I followed the recipe on that basis - you can adapt the recipe easily if you don't have them.  Like everyone else, my silicone moulds were too large - you really would be better off trying smaller moulds, and next time I shall try these...

Update: I spoke to Ashley Palmer-Watts on twitter about the dipping process, and this was his advice:

@Bebejax not bad, just need to not rush at the end, let them re freeze between dips and keep the gel at a steady temp pic.twitter.com/aYfFe7cD
@APWChef Ah, of course, hadn't occurred to keep it constant! Don't suppose you'd care to reveal the magic number?
@Bebejax 28c but you must not over heat the gel much more than 50
@APWChef Thanks! Will try it again and post pics! And yes, took the gel above 50, but was using gold
@Bebejax bronze gelatine is the one we use

Now that you're a Heston expert, don't forget I have his lemon tart recipe on the blog, and for the more adventurous, I've just come across his snail porridge recipe!  Yes.  Good luck with that...  😳