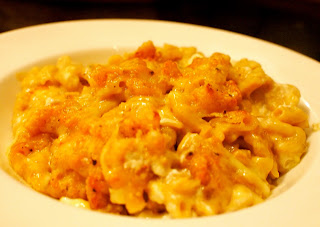 Whenever I get a little bored, or I'm sitting in the bath, I delve into my i-pad espisodes of How to Cook Like Heston...  I like the combination of science, technique and, ultimately, gastronomy - it always has my food brain working overtime... After a particularly late night hosting our annual Christmas quiz, I delved into the episodes again, and looking at my groaning cheese boards (yes, plural), thought I'd better get stuck into some of his cheese recipes.


Feeling slightly jaded, it was definitely the macaroni cheese which caught my attention... Not normally something I'd crave, but the thought of fat-laden carbs was definitely appealing to some bit of me!  Mmmm.... Macaroni cheese - definitely comfort food! [There's a bit more about the science of cheese melting at the bottom]

What can I tell you? Feeling jaded? Reach for this ultra-rich, flavoured-packed, mac and cheese! It was everything I wanted it to be!

[Make sure you use the right macaroni - I happened to have small gluten-free macaroni made with maize and rise flour, which I'd bought in for my gluten-intolerant niece.  It would have worked much better with a durum wheat, larger style macaroni.]

Part of the point of the show was to discuss the properties of different kinds of cheese, and their suitability for different dishes.  Heston, Otto and Jockey each ironed a different type of cheese (yes, ironed), to test their melting points.  The medium cheese melted on the lowest setting of the iron, but the fresh, soft goats cheese wouldn't melt at all - the water merely evaporated and left a layer of cheese behind.  The hard cheese did melt, but only after Heston moved the temperature up significantly.

The goal in most of his cheese recipes is to either release the fat and protein, or to impair that release.  In this dish Heston coats the hard cheese in cornflour to restrict the release of the protein and fat - resulting in a much smoother sauce with no clumping.  The sauce shouldn't be boiled, as that would begin to release the fat and protein again, resulting in a less silky sauce.

The goat's cheese was added in cubes to the dish precisely because it didn't melt like the others - and the resulting pockets of spiky goats cheese enhance the overall cheesiness of the dish.